Two school children have been named as the national winners of Royal Mail’s Young Letter Writer of the Year Competition which was developed, promoted and run by iChild. Iris Ferrar, aged 9 from south London, won the Under-11 age group and Amelia Cunliffe, aged 11 from Bolton, Greater Manchester, was the winner of the 11-14 age group. Each child wins £1000 in vouchers and also £1000 for their school. They were awarded their prize by TV presenter, Helen Skelton.

Iris and Amelia’s entries were among almost 100,000 submissions from children aged 4-14 years old across the UK in response to the question: ‘What is your dream job?’ Entries were received from almost one in five (19%) secondary schools and nearly one in four (23%) primary schools. 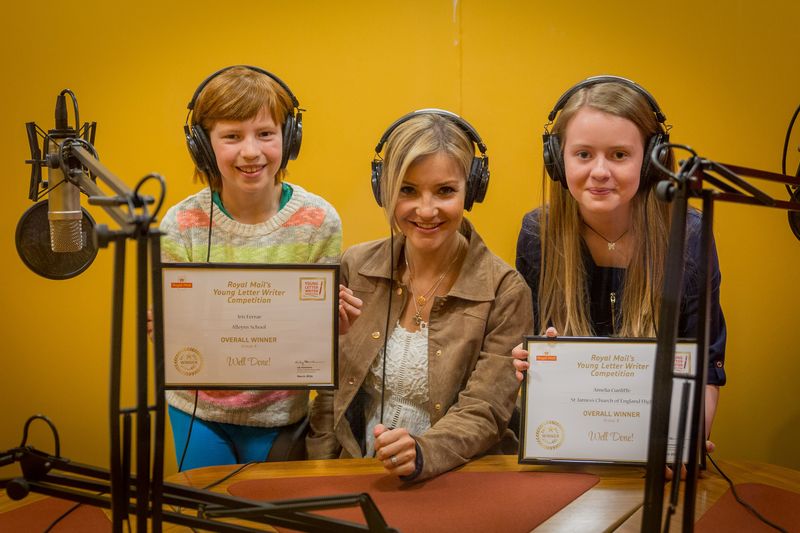 Iris wrote to the Extraordinary and Exotic Zoo describing why she would be the ideal candidate for her dream job as an Animal Language Decoder. Writing to Mr Gruntspeak, Iris wrote how she “could converse with the animal specified and then tell you exactly what they need.”

In addition, Iris said she would be ‘perfect for the job of language decoder’ as she was ‘extremely committed and happy to have her lodgings in the animal enclosures – although she would have to tame the crocodiles first!’

Amelia Cunliffe, winner of the 11-14 age group, wrote to the ‘Department of Space Cleanliness’ applying for the position of ‘Moon Cleaner’. In her creative and imaginative letter, she wrote that she was currently working as ‘head of equipment cleaning for NASA in Washington DC’. She also stated that she ‘loves cleaning’ and that securing the role of ’moon cleaner’ would also ‘create brighter streets at night, meaning less energy consumption’. 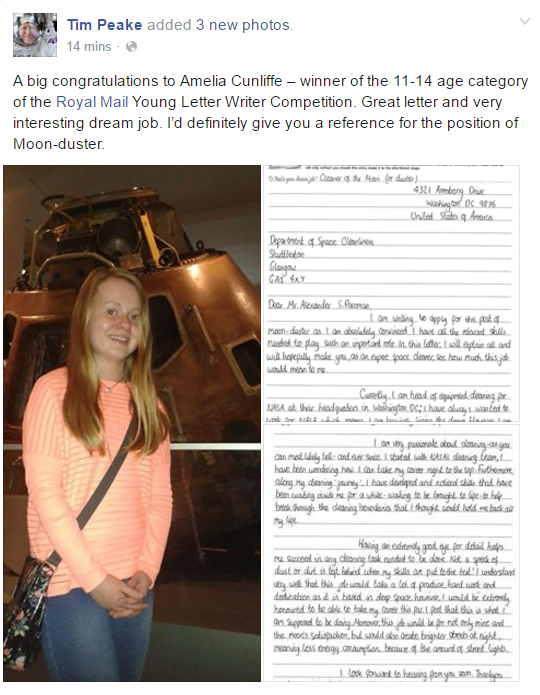 Moya Greene, Chief Executive Officer, Royal Mail Group said: “Nothing packs an emotional punch like a letter. I want to personally thank all our letter writers for giving us real insight into not only the amazing creativity, humour and originality of young people across the UK, but also their ambition.

“In recent months, we have heard from aspiring sportspeople, architects, biotechnology experts, lifeboat workers, chocolate tasters and of course animal language decoders and moon cleaners! These young people have the world at their feet, and I have no doubt from the quality of their letters that many of them will go on to make their career ambitions a reality.”

The four-stage judging process involved all submissions being assessed on a range of criteria, including: correct letter layout and word count, good use of vocabulary, accurate grammar and well-constructed sentences, correct punctuation, strong and engaging content with originality and a compulsion to 'read on'.

Presenter, Helen Skelton said: “Congratulations to Amelia and Iris. I loved both their winning letters. Their creativity and standard of grammar was impressive – I had so much fun reading all of the final entries. I’m sure they will both go on to do great things in whatever dream jobs they choose.”

This is only a preview. Your comment has not yet been posted.

The letters and numbers you entered did not match the image. Please try again.

As a final step before posting your comment, enter the letters and numbers you see in the image below. This prevents automated programs from posting comments.

Having trouble reading this image? View an alternate.